This letter to the editor from the Battle Creek Enquirer showed up in my alerts today.  I’m posting it for a couple of reasons.  First it raises that all-important point of States’ Rights and whether the federal government has the authority to simply drop off refugees to be cared for on the state and local taxpayers’ dime.

And, I’m posting it to remind readers to express your opinion publicly.  It won’t do any good to be well-read and knowledgeable about the immigration crisis we face and then do nothing about it.  While we still have free speech, use it, as this writer has done!  Figure out some way to reach new people every day!   [For the record, I do not know Patricia Cavanagh, but I am thankful to her for speaking out!]

On Dec. 9, the State Department website reported the United State plans to lead in resettling Syrian refugees. “We are reviewing some 9,000 recent UNHCR (United Nations High Commissioner Refugees) referrals from Syria. We are receiving roughly a thousand new ones each month, and we expect admissions from Syria to surge in 2015 and beyond.” 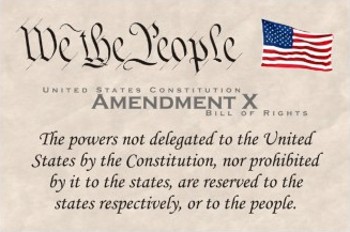 They are to be put on a fast track to citizenship and able to get their families here under The Refugee Act of 1980, signed into law by President Jimmy Carter. The cost is $2 billion per year and could cost $10 billion per year. Why hasn’t the news media disclosed these facts?

President Theodore Roosevelt said, “The one absolutely certain way of bringing this nation to ruin, of preventing all possibility of its continuing to be a nation at all, would be to permit it to become a tangle of squabbling nationalities.”

Oklahoma, Texas, Montana and Utah each passed laws declaring their states sovereign and not under the federal government directives. We the people should remind our state legislators of our rights given to us by the 10th Amendment: “The powers not delegated to the United States by the Constitution, nor prohibited by it to the states, are reserved to the states respectively, or to the people.”

Editor’s note:  Sadly, Oklahoma, Texas and Utah are all big refugee resettlement states, Texas is the largest, so are they all talk and no action about reserving their sovereignty under the Tenth Amendment?

Calling all lawyers!  To my knowledge, no one has ever challenged the federal refugee program (where the UN is choosing our refugees!) on Constitutional grounds.  We need some conservative legal group to step up!