Editor’s note: This is another in what could become a series of guest posts from reader ‘Pungentpeppers!’

Update:  More on the story from the UK Daily Mail!

The idea of bringing in bunches of strange and exotic people into Sweden is turning into a crazy soap opera.

Where are the deluxe accommodations in central Malmö the smugglers promised?

The latest refugee soap opera taking place is on a BUS in a quiet and pristine part of Sweden some six hours north of Stockholm. It’s called Grytan and is a 20-minute drive south of Östersund. Sheltered by one of Sweden’s many evergreen forests, Grytan lies in a sublime setting where those escaping trouble can finally feel at peace and reconnect with nature.

Lodgings specially built for refugees are superb and include all amenities, including a health center, two playgrounds, and internet access, as well as special events including outdoor barbecue picnics with music and volleyball.

This video shows contented asylum seekers relaxing, eating American-style sandwiches, and getting some exercise. What fun!

But now there’s rebellion brewing in Grytan. Some new arrivals refuse to get off the bus! They say Grytan is too dangerous! Bears and wolves might eat them!

One of the frightened newcomers is above.  (See all of the photos showing the rest of the group and the lovely facility prepared for them.) 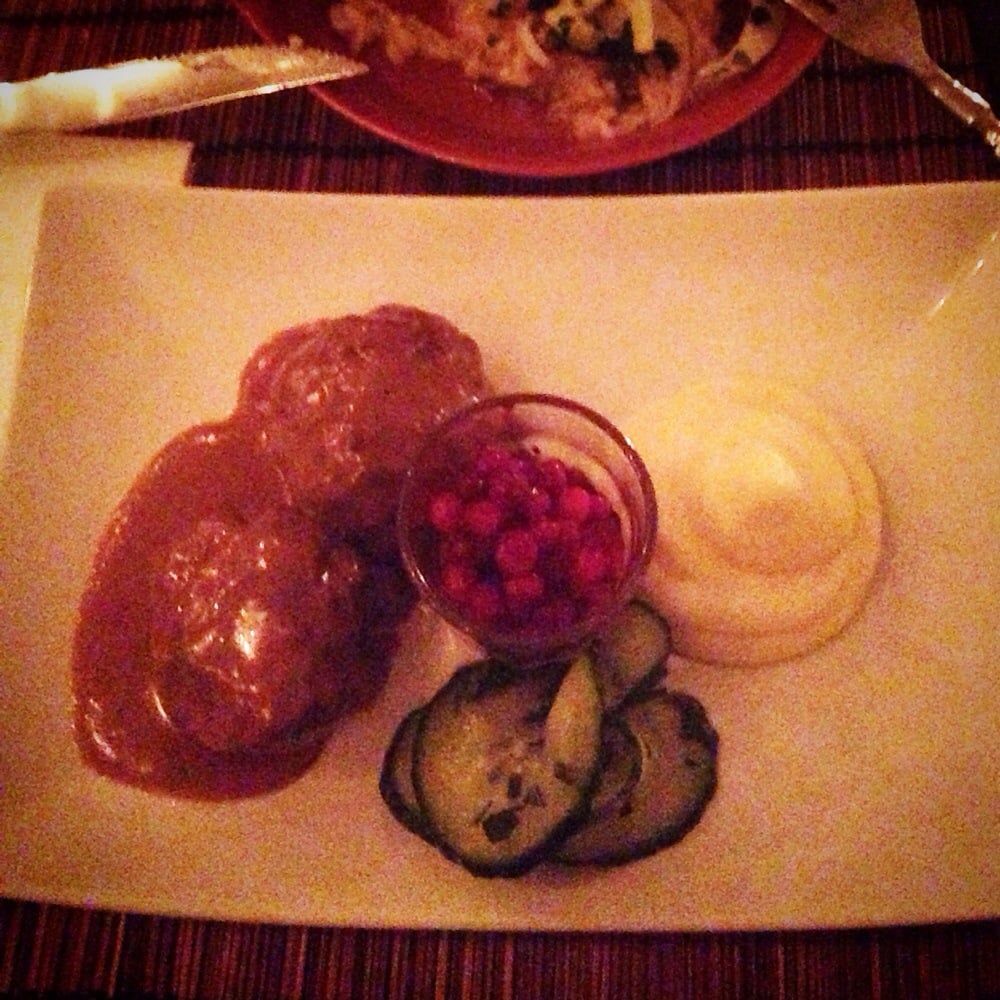 They all look like Middle Eastern men – is that a surprise? The protesters who were interviewed on Swedish radio confirmed their origins.

They said they need a “better place” and that “here exist bear and wolf and more animals …. we are Arab people. We can’t stay here in that weather”.

Another man complained “I am 75-years-old and come from the Middle East. Then I get sent to a place that looks like this,” said a man from Syria to the local Östersunds-Posten (story at The Local), pointing to the icy road.

“It is dangerous for me to be here,” he said.

Some of the protesting asylum seekers spent the night on the bus and then complained it was cold. In the latest development, the asylum seekers are threatening to stage a hunger strike! I suppose the idea of elk balls with cranberries and cream sauce does not appeal to them.

When will the Swedes get it right?

For more on those yummy elk meat balls, go here.

See our complete archive on Sweden by clicking here (includes posts on other ungrateful “refugees”).  LOL! Remember these guys who complained that their Swedish castle was haunted.

In the previous post we gave readers the tiny Syrian resettlement numbers (so far!), but check out the Somali numbers—2,801 new Somalis have arrived in America in just the first three months of Fiscal Year 2015!   At this pace they will surely be approaching the high George Bush Somali “welcoming” years!

Once again, see the very cool data base maintained by the US State Department’s Refugee Processing Center.  (I use the fiscal year, but you might find it more understandable to use the calendar year option).

Somalis were resettled in about 115 cities large and small, but here are the top ten with the numbers in parenthesis.  Again, these numbers are for three months (October, November and December 2014, the first three months of Fiscal Year 2015).  And, it is possible that all December data has not yet been entered.

(You might want to check my numbers, go to the data base, and see if I missed some top ten city and see if your city ‘welcomed’ Somalis!  By the way, Anchorage, Alaska got 30 more mosque worshipers).

New readers:  See ‘Why so many Somalis in Minneapolis?’ our top post of 2014 (even though it was written in 2011)—thank three ‘Christian Charities’ for flooding Minnesota with Somali Muslims.

Once again readers pushed this post through the roof yesterday (What! you were spending your holiday reading about Syrian refugees coming to your cities?).

Recently I came across this very cool data base maintained at the Refugee Processing Center (a US State Department data collection center).   I just tried it for Syrian refugees who entered the US from October 1, 2014 to December 31, 2014 (that is three months of the fiscal year that ends September 30th, 2015).

The number is still small (164) so if the State Department plans to get to 9,000-10,000 (mostly Muslims by the way) by September 30th, they will soon be opening the spigot pretty wide.  Also, it is possible that all December arrivals are not yet entered in the data base.

Here are the numbers (just refugees, not asylum seekers or any others who found another way into the US):

Go to the data base now and have some fun!  Check out nationalities who came to your city over a given time period.  The data is available back to 2002.