The Leftwing federal contractors *** are on pins and needles waiting to see if they can reel in their big fish—Texas Governor Greg Abbott.

Texas is their most desired catch because although Abbott tried to get out of the program several years ago, the state remains the top refugee placement state in the nation (the Left is turning Texas blue!).

Smyers told reporters that many church groups on the ‘religious’ Left and advocates for Open Borders have met with Abbott’s staff.

Here is the Statesman headline from yesterday:

The article suggests that the deadline is “looming.”  It isn’t! as I explained here when I told you about the dumb Republican governors who jumped on the consent bandwagon prematurely when they obviously hadn’t read the guidance from the US State Department.

But up in Idaho….

We can add another governor to our dumb governors list.

Governor Brad Little joins the list of governors thumbing their noses at one of the the President’s major goals—reforming the dysfunctional UN-driven Refugee Admissions Program and reducing refugee admissions.

Although Idaho doesn’t receive the massive number of refugees that Texas does, it nevertheless has been one of the major controversial locations in the country where many citizens there do not want to see more diversity and more poverty moved from Africa, Asia and the Middle East to their rural state.

Here is a headline yesterday from The Neighbor:

You can read the story yourself, but I want to be sure you see the Governor’s letter to Secretary of State Pompeo:

Three cheers for a government body that actually read the rules.

More important than the governor’s weak letter is this letter that Twin Falls County sent to the Dept. of State.  In the opening paragraphs, commissioners criticize the Funding Guidance for its lack of clarity, but toward the end of the three-page letter, they penned an important few paragraphs.

Don’t forget, this whole exercise is about whether federal contractors will get MONEY (your tax dollars) later in 2020.

Shut out of so-called ‘stakeholder’ meetings!

They want to be included in consultations in the future (having been shut out so far) and if this exercise is to be repeated they want to hold “robust public hearings.”  That is exactly what should be happening across 49 states (Wyoming has never been in the program). 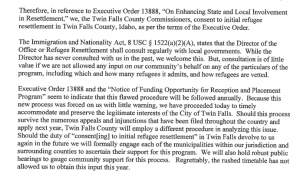 When a contractor is ‘hired’ by the feds and approval is given by, in this case, Twin Falls County (and the governor), contractors may place certain refugees in a 100-mile radius of the resettlement office.

With its consent, Twin Falls County has granted permission for refugees to be placed in these locations within a hundred miles. See radius calculator.