I’m getting dragged down by all the awful news of governors one after another (even some Republicans) jumping on the bandwagon to oppose the President and to support importing more poverty to America. 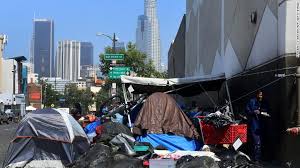 One reader suggested that the media interview in a homeless camp in say LA and ask the homeless (on camera) how they feel about Third Worlders coming to the city and immediately given housing, food, medical care.  We can dream!

Of course I have a lot more to say in the days and week ahead about the President’s refugee reform efforts and how no matter how many citizens speak up in favor of reform and slowing the flow, Open Borders Inc. is better funded and more organized and it’s not because of any power naive humanitarian voters have, it is about the almighty dollar.

Can you say, George Soros, Paul Singer, Michael Bloomberg, Chambers of Commerce, global corporations, campaign donations (to Democrats and Republicans), and nine phony-baloney so-called charities.  US Refugee resettlement is driven by, yes, those seeking a borderless world and those getting rich on the backs of refugee pawns.

Sorry, I told you I was going to give you a little laugh this fine December morning!

Here it is!  ‘Invasion of Europe’ news!

The story is from the German publication Deutsche Welle:

Swedish town to integrate refugees by housing them with pensioners

The first residents have moved into a new housing scheme that mixes seniors, young people and foreigners who came to Sweden as unaccompanied minors seeking asylum. They are required to socialize with each other.

The first time the young immigrant men met their future Swedish neighbors, it was Kristin Ohman (photo above) who made contact.

Here is Human Rights Watch reporting that most of the unaccompanied ‘children’ who came to Sweden in 2015 were teenage boys from Afghanistan, Syria, Somalia, Eritrea, Iraq and Ethiopia.

“They were standing alone so I came over to meet them and I gave them some flowers,” the 74-year-old smiles, as she remembers the gathering of the 70 people hand-picked to live in her new apartment building. “They seemed a bit shy, but they were all very positive.”

The “SällBo” project in the Swedish city of Helsingborg aims to combat loneliness among the elderly at the same time as helping former child refugees integrate by housing them side-by-side in the same building. There are 31 flats for retired people and 20 for 18- to 25-year-olds, ten of which are reserved for people who arrived in Sweden as unaccompanied child asylum-seekers.

The project’s name combines the word “sällskap,” meaning company or togetherness, with “bo,” meaning to live, and under their contract, residents commit to socialize with each other for at least two hours a week, helped along by a live-in social coordinator.

“It’s not only the first in Sweden,” says Dragana Curovic, an integration specialist at Helsingborgshem, the city’s municipal housing company. “Our constellation is unique anywhere in the world.”

Curovic and her colleague hatched the idea for their integration project two years later, when considering whether to convert two floors back into assisted housing for the elderly and leave the bottom level for young immigrants. In the end, they decided it would be better to mix the groups together.

“We thought, ‘okay, we have this house, and we have these needs, and we know that there are a lot of lonely people. Why don’t we do an integration project, where there are different kinds of people?'”

Her hope is that by meeting and working together with elderly Swedes, the young men will improve their cultural understanding and absorb practical skills they would normally have learnt from their parents. Former child asylum-seekers face a lot of stigma in Sweden, so Curovic hopes the project will also help them understand that not everyone in Sweden views them with suspicion.

And, this is at the very end of the story!  Kind of makes you wonder if Deutsche Welle was having a little laugh too! 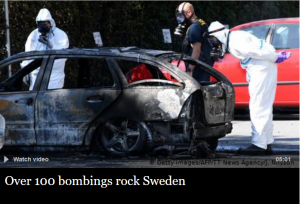 How did Sweden get to this awful place?  They opened their gates wide to the Third World! Pray this morning that we will never become Sweden!

See my ‘Invasion of Europe’ archive by clicking here.