Update! Be sure to see my post here as a followup—we found the instructions that the other side is using to help their people how to get mobilized.  You can use this too!

As I have been saying for days and weeks now, thanks to the President you will have an opportunity to have a say in whether refugees will be placed in your communities going forward.

I have a lot more details for you about how it will work and how the nine federal contractors are trying to stop the President’s Executive Order, but first you need to know where the major resettlement sites are in the nation.

But, never forget these points!

The contractors have been placing refugees in a 50-100 mile radius of their offices. Don’t think you are off the hook if your city isn’t on the map.

See Virginia for example.  They have less than ten main refugee contractor offices, but have placed refugees over the last ten years across the entire state.

Also, the new requirements allow them to place new arriving family members with their spouse and children, and you can’t control that.

And, most importantly, refugees can move! There is nothing to say they can not simply move to the next town or next state and there is nothing you can do about that either.

At this point you are likely saying, why bring any?  Get Trump re-elected and maybe he will be able to do more!

I’ve chopped it up so that I could enlarge the text. In case I have edited the screenshot in the middle of a city, see it whole here.

The refugee industry has pulled out all the stops to mobilize their supporters (they have well-established community organizing networks in each of these locations) to tell city/county elected officials that they want refugees and of course the governor must concur. (More on that in an upcoming post. No wonder the contractors are suing Trump!)

Six governors (so far) want more refugees.  I’ll be tracking them as I see news.  See my right hand side bar for the list so far.

This is the legend for the map.  These are the nine contractors, but they all have many subcontractors working under them. 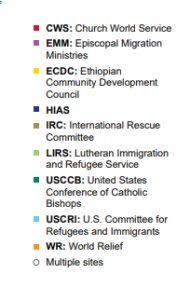 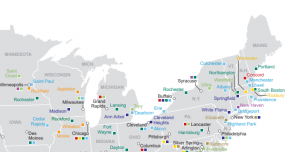 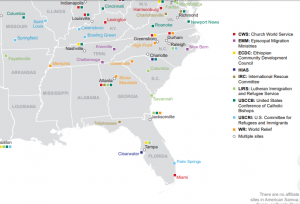 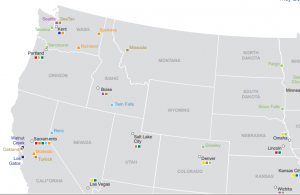 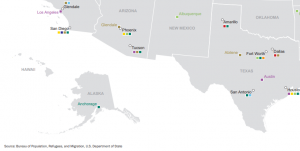 We know there has never been a resettlement agency operating in Wyoming and that Hawaii only gets a handful in some years. West Virginia did have a resettlement office until recently.

Refugees have been placed in Mississippi, Louisiana and Alabama in recent years, including in 2019. But, the number is extremely low, so I am assuming they were family reunifications.

However, Oklahoma City does have a resettlement agency, so I’m not sure why it isn’t on the map.

Update!  I should have thought to look at the map for 2017 at the time Trump became the President.  Check out that map and see how many more resettlement sites were in operation at that time!  Yikes!  And, I remember that toward the end of the Obama administration, his State Department was looking at another 40 or so possible sites. Progress is being made!

Please note that this post is filed in my ‘Where to find information’ category.