Do you remember this headline only four short years ago?  Probably not.  I hadn’t, although I surely wrote about it at the time.  It was right after one of those horrible Islamic terrorist attacks in Europe and it woke from slumber some Republican governors for a few minutes.

30 Governors Call For Halt To U.S. Resettlement Of Syrian Refugees

My how things have changed.

They talked tough then (mostly because Obama was in office and they knew they had no voice), but now when the President has actually presented them with an opportunity to put up or shut up and go on record saying NO to more refugees from the Middle East and elsewhere, well now they are worried about their “workforce” and they tuck their tails and run fearing they will be perceived as mean and unwelcoming by the Dems.

Here is a very cool graphic from NPR at the time. 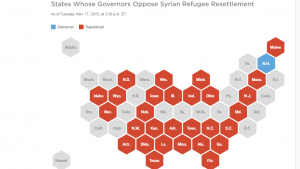 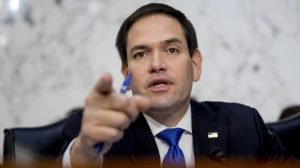 Nothing has changed by the way!  We bring fewer Syrians these days, but the vast majority of Syrians who do come are Muslims.

And, not just Syrians, but Iraqis, Somalis, Burmese Rohingya and literally tens of thousands of Afghans.

The vetting can’t really be improved because as Senator Marco Rubio said at the time:

That same common sense applies to most places in the Middle East, Asia and Africa—who you gonna call?

Although I should be writing on all sorts of things on this subject, not to mention that my other blog ‘Frauds and Crooks’ is suffering from lack of attention, I found myself rummaging around Wrapsnet (the Refugee Processing Center) and holy cow!

Although most of those came as Obama was leaving town, 6,413 of the Syrian Muslims came in Trump’s first (partial) year with 602 since.

Here is where the nearly 20,000 Syrians were placed: 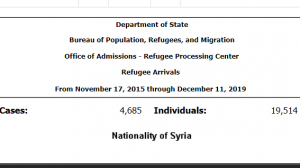 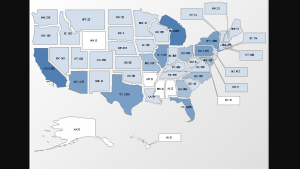 Amazing how we forget!

He linked a list of today’s Republican Governors and so far that we know of (some might be hiding!), Republican governors of Utah, New Hampshire, Arizona and North Dakota are opposing the President (and America Firsters) on the issue of Refugee Resettlement.

Because of the national attention Burleigh County’s Monday meeting was generating, the governor obviously went to the Administration to get clarification on how the process works and I want to comment on a few items he posted from the governor’s office.

But, he hadn’t gotten the clarification when he sent his letter supporting the program way back on November 19th in which he says they are happily integrating their refugees into their workforce.

Here are a few points I want to highlight this morning from what the governor reports.

First, he got clarification that under the new Trump resettlement program this same process will be used every year, and each year the local community and the governor must consent.

The Office of Intergovernmental Affairs confirmed that local jurisdictions will need to consent every year for refugee resettlement to continue.

He learned that in addition to the 18,000 cap on the regular refugee program for fiscal year 2020 (which began on October 1, 2019) there will be 10,000 additional special refugees from Afghanistan and Iraq (virtually all Muslims we surmise) who supposedly helped our military in some way or other.

They are treated as refugees with all the social service benefits refugees receive, but with one important exception—they can go anywhere in America they wish.  Regular refugees are placed by contractors*** in the locations they choose.

The Office of Intergovernmental Affairs also stated that up to 10,000 Special Immigrant Visa (SIV) holders – individuals who were employed by or on behalf of the U.S. government in either Iraq or Afghanistan – are eligible for reception and placement services through the U.S. Refugee Admissions Program. Unlike refugees, SIV holders can choose where to settle in the United States. LSS is allowed to provide services to SIV holders and has served up to 21 annually since 2016, though none were served in 2019, according to the agency, which includes SIV holders in its reported total for refugee resettlements.

Then he did confirm why Republicans like himself support the flow of low-skilled refugees to America—because their state business interests want the low wage workers.  And, because they don’t want any global corporations that might be eyeing ND to think the state is filled with bigoted hateful people. (He doesn’t say that, but that is what he means.)

“We support the administration giving states and local jurisdictions the consent authority on whether to continue receiving refugees, and we respect the right to exercise local control,” Burgum said. “That being said, we have serious concerns that denying resettlement to a handful of well-vetted and often family-connected refugees would send a negative signal beyond our borders at a time when North Dakota is facing a severe workforce shortage and trying to attract capital and talent to our state.”

Never mind that those low-skilled refugees earning low wages will need taxpayer-funded services and will eventually vote the Republicans out of office.

North Dakota is done for now, but you will have another shot at it later this year as the feds prepare for fiscal year 2021 that begins on October first of 2020!   Assuming he runs again, Burgum will be up for re-election at that same time.

For others of you….

For many years, it has seen a lot of controversy over refugee resettlement.  I just was reminded when I scanned my posts on the state that the Somali knife attacker in St. Cloud in 2016 was a refugee originally resettled in Fargo, ND

***For new readers these (below) are the nine refugee contractors that monopolize all refugee placement in America.  For decades they have decided in secrecy where to place refugees and they don’t want to lose that power because even as they pontificate about their religious convictions and humanitarian zeal, they are Leftwing political groups working to change America by changing the people and using your money to do it!