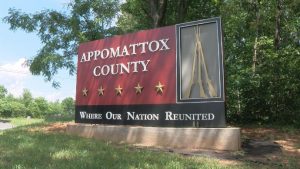 As conservative Virginia watchers decry the state’s slide into the blue, there are still pockets of patriots in the heart of the old dominion where some elected officials are standing up to the Democrats.

Described as the “heart of Virginia,” Appomattox County stands out this morning as one such place.

There may be others, but I think I would have heard of them—counties that are backing the President and telling his State Department that they don’t want any refugees in 2020.

Frankly anywhere in America is vulnerable as I pointed out here, here, and here:

Virginia’s Democrat Governor Ralph ‘blackface’ Northam was one of the first governors in the nation to tell the State Department—send more refugees our way because we have run out of poor people in Virginia and we need more reliably Democrat voters (who want free stuff) to eventually outnumber the deplorables.  (He didn’t exactly say that, but that is what he means!).

The vote against becoming a refugee placement county comes in the wake of a virtual civil war going on in Virginia over gun rights.

UPDATE: (WSET) — Appomattox County voted in support of a resolution refusing to become a refugee sanctuary.

The Appomattox County Town Council voted to refuse to become a refugee sanctuary because they don’t have the funds to provide services to refugees.

He says the county would have to provide safety, education and housing for refugees.

“Finding the appropriate property in all to house this,” said Carter. “Is this going to interfere with future buildings or structures?”

Carter said there are a lot of unknowns in becoming a refugee sanctuary, which is why they support the town.

He said the county also doesn’t have an influx of refugees re-settling to the area.

Residents said they are happy with the board’s decision and they agree with the county.

The update jumps to an earlier story.

It is important for you to know about the Second Amendment fight going on in Virginia.  Interesting that Appomattox County elected officials have connected the issues.

APPOMATTOX Co., Va. (WSET) — More than 70 localities in Virginia have voted to become a ‘Second Amendment Sanctuary’ sending a message to state lawmakers they want to protect their right to bear arms, but a local county is trying to send another one.

Leaders in Appomattox County approved a resolution in November.

By becoming a Second Amendment Sanctuary community, the Board of Supervisors says it will oppose, within the limits of the law, any efforts to unconstitutionally restrict gun rights and use legal means to keep it from happening.

The decision to start declaring localities a ‘Second Amendment Sanctuary’ comes after Virginia Democrats took control of the General Assembly in the latest election.

Do you live in a red county?

Go here for the address at the US State Department.  And, check out which states and counties have said YES to more refugees, here.

LOL!  I don’t know if the State Department plans to list counties that say NO!

Don’t be confused by the cities that have sent consent letters, it is county commissioners who are the decision-makers according to the State Department funding guidance.

Those are the rules in order for the refugee contractors to get more money after June 2020.

For new readers these (below) are the nine federally-funded refugee contractors that monopolize all refugee placement in America.  For decades they have decided in secrecy where to place refugees and they don’t want to lose that power because even as they pontificate about their religious convictions and humanitarian zeal, they are Leftwing political groups working to change America by changing the people and using your money to do it!