You may remember Democrat Governor Northam because of the “blackface” scandal  he endured earlier this year, one which would have driven a Republican governor from office and into political oblivion.

And, surely you recall his cruel words during an abortion debate about letting babies die post-birth.

So it should be no surprise that one friend quipped when told the news, “yes, kill the babies to make room for the refugees!”

Unless I have missed some, Virginia becomes the 5th state to tell President Trump that the state wants MORE third world poverty (eventually more voters for the Democrat party)!

In the right hand side bar here at RRW  I’m keeping track and so far we have PA, OR, UT, and WA as states where the governor has said, send us more!

As I said here, the Open Borders Refugee Contractors are organizing nationally to pressure the President and to get ready for the flood of migrants they expect once Trump is no longer standing in the way.

Your job is to make sure that Donald Trump remains in the White House for another term or we are done!

“I have read federal Executive Order 13888, and I write to reaffirm Virginia’s position that we welcome refugee resettlement in the Commonwealth,” he wrote in the letter.

President Donald Trump signed the order in September explaining that the Federal Government will only resettle refugees in those jurisdictions in which both the state and local governments have consented to receive refugees under the Department of State’s Reception and Placement Program.

Two things that jumped out at me from the Governor’s letter indicating that he doesn’t understand the program as it is being carried out by the contractors in the state:

Because of our proximity to Washington, D.C., we are a preferred location for many Special Immigrant Visa holders – Iraqi and Afghanistan refugees who provided services to the U.S. military in those countries, and whose lives and families are in danger because of that service.

What the heck is he talking about?  Why do previous employees of the US military have to live in proximity to Washington, D.C.?  We have brought tens of thousands of Afghan and Iraqi SIVs as separate from the Refugee Admissions Program over the last ten years.

We are never told how the SIVs are divvied up among the contractors and clearly if it is true that more of the Muslim Afghans and Iraqis are being placed near DC (Northern Virginia is mosque-central after all), the contractors have a hand in making that decision along with the feds. The Governor is out of the loop!

If the governor is telling the truth, Virginians should be asking why they are getting a disproportionate share of SIVs.

Virginia helps refugees settle into new homes only in those localities that participate in the Virginia Community Capacity Initiative, which ensures that a community’s elected officials, faith leaders, schools, and other stakeholders are committed to helping refugees build new homes and lives. We work with resettlement agencies that have deep ties to these communities.

“Resettlement agencies” are of course the federal refugee contractors. LOL! and I bet a contractor drafted the governor’s letter.

I had never heard of this Virginia Community Capacity Initiative and when I searched around I found very little, just some verbiage at some Catholic sites about finding housing for refugees.

I doubt the program has any statewide application so for the governor to suggest that all of the communities in the state that receive refugees have already said they can handle more refugees is a stretch (well, a lie!).

I decided to see just how many ‘welcoming’ communities existed in Virginia and so naturally went to the Refugee Processing Center data base.

I limited my search to the last ten years of refugee placement in the state and compiled this list (below) of cities/towns that had refugees placed in their community.

And, you should know that the Afghan/Iraq special refugees are not included in this database. Indeed, I have never found any database which tells us where the SIVs are sent.

Some locations may have only received a handful of refugees, but nonetheless, the list is extensive.  I’m just wondering if the Virginia Community Capacity Initiative was at work in all of them. 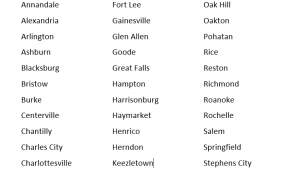 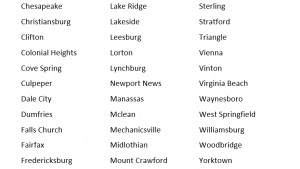 And, while I was having fun with the data last night, here are the top ten ethnic groups resettled in Virginia in the last ten years.

11,800 regular refugees (not including SIVs) have been placed in Virginia since October 2009 (a small number compared to some other states). But, again we don’t know how many of the special refugees, SIVs, were provided housing, medical care, and other welfare services in the state.

As I said yesterday at ‘Frauds and Crooks’ …. as Virginia turns blue, we see some very disturbing criminal cases involving ‘new Americans’ of all stripes in the Old Dominion. Check out my posts there.