Two days ago the US Conference of Mayors told America that 18,000 refugees for fiscal year 2020 is too low and that 100,000 a year is their preferred number.

They also made it clear that they do not want a local or a state role in deciding where refugees are placed saying it would create a “patchwork of conflicting policies.”

That means of course they are affirming that Washington (and its nine contractors that monopolize all refugee resettlement in America) knows best.  (Well, except for when Trump is in the White House!)

Here (below) is their press release and a screenshot of all those mayors who signed the letter. (I told readers three days ago that the aim of the Open Borders community organizers was to get local elected officials on board.)

This once again confirms that the Left has captured local elected offices and the only hope of pulling out of this decline is for you all to get involved locally where you live and find candidates to challenge them.  It is a tall order that will only be accomplished if Trump gets four more years to buy time for America Firsters to get to work!

From the US Conference of Mayors:

(There are 1,408 mayors in the conference, so I guess these 88 are calling the shots! What do the other 1,320 think about the Conference taking this position?)

Washington, DC – Today, 88 bipartisan mayors from across the country sent a letter to Secretary of State Mike Pompeo, urging the Administration to rescind a September 26 executive order that revamps the U.S. resettlement system and could drastically reduce, if not entirely stop, the resettlement of refugees in cities.

The mayors also urged Secretary Pompeo to return this year’s refugee admissions to previous annual levels. The Administration announced the same day that it is slashing the number of refugees who may enter the country in 2020 to 18,000–the lowest since the program began in 1980 and a reduction of nearly 80% from just a few years ago.

The feds and their nine contractors (not elected by anyone!) know best!

The letter states, “The Executive Order would fundamentally change the structure of the U.S. resettlement program by devolving key decisions primarily to the states and ultimately lead to a patchwork of conflicting policies running contrary to the purpose of a national resettlement program….

In addition to addressing the country’s strong tradition of providing safe haven, freedom and opportunity to refugees fleeing the world’s most dangerous and desperate situation, the letter also cites the positive impact refugees have on the cultural and economic prosperity of cities and the nation as a reason to increase the cap.

The U.S. Conference of Mayors has long advocated for policies that provide adequate support for refugees and refugee resettlement.

The most recent policy adopted by USCM on this issue calls for admitting at least 100,000 refugees per year.

Here (below) is a screenshot of the signatures.  Does your mayor want to cede all power to the UN/US State Department and its contractors to decide how many impoverished people your city will host?

Remember fed’s contractors only are responsible for placing refugees and getting them signed up for their “services.”  Most of their care is on you—local and state taxpayers!

That is what these mayors are asking for—more poverty for your town or city! 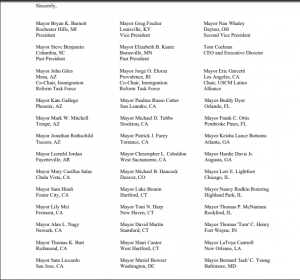 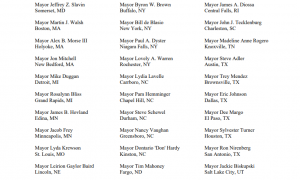 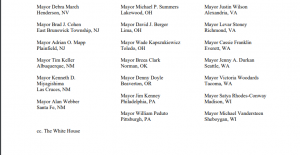 They say the list is bipartisan but I don’t have the time to go through and figure out who might be a Republican, so let me know and I will do an update and tell readers which ones are Rs.

Here is what you should do!

Make sure that your mayor knows that this is not a freebie political position for them!

If you find your mayor on the list, write a letter to the local paper and say that your mayor is advocating for 100,000 refugees for America and stating unequivocally that he/she does not want to have any say on how many are placed in your city.

The mayors who signed the letter want that decision left up to bureaucrats in Washington along with the nine contractors that monopolize all refugee resettlement in America (below):