It is Secretary of State Pompeo who is collecting letters from governors and local elected officials about whether they are opting-in or opting-out of the US Refugee Admission Program. 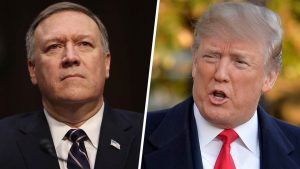 (Yesterday I posted a sample letter that you might use as a template when you write to your governor or county commission.)

Since the governors who have already said YES (how many we don’t know) to ‘welcoming’ more poverty for local and state taxpayers to support are likely round-filing (trashing!) your letters, why not send a copy directly to the Secretary of State.

If your governor has, or hasn’t, opted-in or out, then still send a letter to the US State Department.

Frankly, this whole exercise is a barometer for the President.  We assume he will be reelected, and so during the next five years we expect him to make serious changes to how we resettle refugees (if we resettle refugees).  He needs to know that you care.

Send your letters to:

US Department of State

Try to get this done by Christmas!

Just now I reported on how the New York Times covered the Burleigh County North Dakota hearing and vote on whether that county would say yes, or no, to MORE refugees in the coming year.

A few paragraphs near the end of the biased report, which never mentions that the ‘religious’ groups placing refugees are actually federal contractors*** paid to place them in almost all states, jumped out at me.

Jenny Yang, working for the refugee contracting agency World Relief says 16 governors have already opted-in and told the State Department that they want MORE poor people for their state to take care of.

I’ve been following closely and so far media reports indicate only these states are in:

I guess you all need to find out if your governor has quietly opted-in without any public mention (that is, in secrecy).

From the New York Times:

Jenny Yang, vice president for advocacy at World Relief, an evangelical agency whose work includes resettlement, has been steering an effort to lobby governors to keep their states open to refugees.

She said about 16 governors have submitted written consent, six of them Republicans. Gov. Doug Ducey, Republican of Arizona, agreed after receiving a letter supporting resettlement signed by 250 evangelical leaders. Gov. Greg Abbott, Republican of Texas, who leads the state that received the most refugees last year, has not yet offered his view, despite a plea from the mayor of Fort Worth to continue accepting refugees.

As I have been saying, they are gunning for Gov. Abbott of Texas.  Sure hope you Texans are telling the governor what you think.

Since Texas is the top resettlement state in the nation and has been for several years, Abbott could easily say—we need a breather to assimilate those we have ‘welcomed’ for the last decade!

***For new readers these (below) are the nine refugee contractors that monopolize all refugee placement in America.  For decades they have decided in secrecy where to place refugees and they don’t want to lose that power because even as they pontificate about their religious convictions and humanitarian zeal, they are Leftwing political groups working to change America by changing the people and using your money to do it!

In a packed meeting room, County Commissioners in Bismarck, voted 3-2 to ‘welcome’ more impoverished refugees to the county in the coming year—25 total they say.

As the country watched (even the NY Times was watching) the county leaders took a wishy-washy middle of the road position because as far as I know there is no rule or regulation that lets them set a cap.

Once you agree to take in third worlders from Africa, Asia and the Middle East, a county can’t dictate numbers or select refugees by ethnicity or religion.

Here is a brief story from local KFYR-TV:

BREAKING: Burleigh County commissioners vote to allow refugee resettlement with a cap of 25 for next year after a four hour hearing.

Both sides of the issue voiced opinions and addressed the commissioners.

Peluso and Bitner voted no.

The option surfaced after President Donald Trump issued an executive order allowing local governments to make their own decisions.

For a more complete and incredibly biased report see the New York Times story from overnight.  As always there is absolutely no mention that the do-gooder Lutherans who resettle refugees in ND are paid, as federal contractors, to place the refugees throughout North Dakota.

The NYT does point out some pitfalls we see with the President’s approach when he opened this can of worms. (Don’t get me wrong, chaos/confusion is a good thing politically !)

There is one very bright side all of you need to note:  the process is forcing state and local elected officials who have been happy to hide behind the mantra—this decision of where refugees are placed is a federal decision—to go on the record for all voters to see who is friend or foe on the issue of our time.

You can read the whole NYT story yourself, here.

LOL! One thing jumped out at me and that was that although the reporter calls the President, President Trump, once at the beginning of the story.  In four additional references he is relegated to “Mr. Trump.”

Mr. Obama is referred to as “President Barack Obama” (not former President…).

See the right hand side bar for the governors who have caved already and told the President that they want more impoverished refugees placed in their (your!) state.

The NYT says 16 governors have sent letters, if that is true they are keeping their mouths shut in the media.

If you are contacting elected officials please send me feedback at refugeewatcher@gmail.com