This is the third in my series of posts I’m calling ‘Knowledge is Power’ because it is up to you to push back on the Open Borders groups operating with taxpayer dollars to change your communities.  There is no national group working for you, so it is up to you to collect the information so that when you speak up, you have your facts.

I am also writing this series because I am getting so many e-mails from new readers asking me questions about how all this works, and I haven’t enough time in the day to answer them all (if I want to have time for other things in life!).

As I have said repeatedly, there are nine federal refugee resettlement contractors that monopolize all resettlement in the US.

They do not do their work out of charity, religious or otherwise!  They are paid millions annually from the US Treasury (see Knowledge is Power II) and oversee a vast network of subcontractors—which they call “affiliates” or sometimes “partners.”

BIG CONTRACTOR basically acts as middle man with the taxpayer-supplied millions and passes some of it through to subcontractors working in over 200 locations they have selected by working in secrecy with like-minded federal officials in the US State Department (Populations, Refugees, and Migration) and the US Dept. of Health and Human Services (Office of Refugee Resettlement).

Of course BIG CONTRACTOR doesn’t pass all of their federal funding to the subcontractor because they keep a substantial cut for themselves to pay for six-digit salaries*** of the bigwigs that run these fake charities.

And, don’t forget BIG CONTRACTOR is not just promoting this legal program, the US Refugee Admissions Program (USRAP), but acts as a key political player in the Leftwing’s efforts to open our borders and promote amnesty for illegal aliens.

At their peak during the Obama Administration there were about 325 subcontractors working for the big nine and we are told that due to the President’s refugee slowdown they lost about 100 offices.

In 2016, just as Obama was leaving office and they were expecting Hillary, the State Department was working with the contractors to identify at least another 40 towns and small cities for the large numbers of poor people they were planning to move to America in a Clinton presidency.

Finding your contractor and its subs….

Here is a list of the Big Nine I found at the Refugee Processing Center.

This is a screenshot so links are not hot. 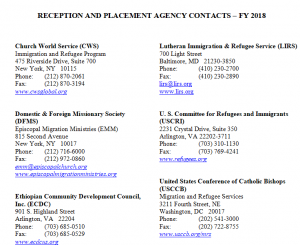 To find your subcontractors go to the contractors website and search around—you will most likely find a list of their affiliates/partners.  It gets tricky with the US Conference of Catholic Bishops because it could be a Catholic Charities that is working near you and

Can’t find the list on their website? Call any of the contractors and ask for their list of affiliates and while you are at it, ask for their recent IRS Form 990s.  All non-profits are required to make those available upon request.  I suspect you will get a runaround, but that will be a learning experience for you too.

Even if you are steamed, be polite any time you call any of the contractors or subcontractors—you know the old saying about catching more flies with honey!

Another option is to do what I suggested in ‘Knowledge is Power’ I and ask your state refugee coordinator for a list of all subcontractors working in your state.

Next, find their funding!

Once you have identified your subcontractor, see if you can find their IRS Form 990s, either by asking them directly or searching online.  You can use Guidestar, but sometimes you will find it on their website or simply search for the name of the agency with “Form 990” and a recent one might pop up.

The useful information—how much government (taxpayer) money they get—will appear on page 9. You can readily see the percentage of their funding that comes from taxpayers compared to what they have raised privately.

Private funding for refugee resettlement is negligible because the public isn’t eager to open wallets for this kind of work. I have said till I am blue in the face that these contractors could not survive without the huge infusion of federal dollars Ted Kennedy/Joe Biden and Jimmy Carter made possible for them.

Here for example is a screenshot of Catholic Charities of West Virginia pages one and 9 one of our concerned citizens acquired.  Although WV doesn’t get very many refugees, there is still a significant amount of taxpayer funding flowing to a ‘religious charity.’ 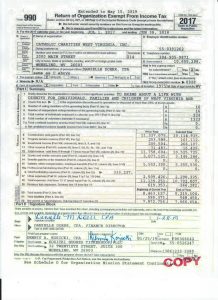 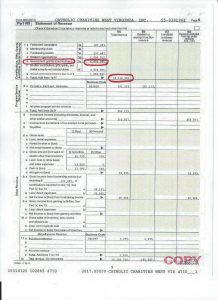 Unfortunately, especially with smaller subcontractors, you might find all of their funding listed as “all other contributions”(making it sound like they got private funding), but I think that is a trick because their “contributor” was most likely one of the BIG CONTRACTORS and the money is from government grants and contracts.

***Although that Catholic Charities Form 990 above doesn’t show the salaries page, just for fun this is the salaries page for one of the big nine—the Manhattan-based International Rescue Committee—to remind us that the refugee industry is big business! 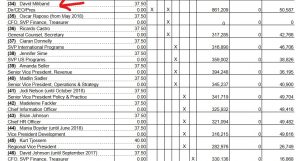 No wonder they are all fighting so hard against the President who has been cutting their government boodle!  But, apparently not enough as the top dogs are still getting theirs even as they shutter offices and lay off the low level staff!

Now what do you do!  You find a way to publicize what you are learning, and I recommend a statewide blog or website.

I believe it is Trump’s policies on immigration that are behind the hatred they have for the man.

Once they have significantly changed the demographic make-up of America there will no longer be an ‘America First.’

6 thoughts on “Knowledge is Power III: Find Out Which Refugee Contractors are Working in Your State”