For any of you who have followed or even remember the Australia “dumb deal” as Trump called it before honoring it, here is an update. 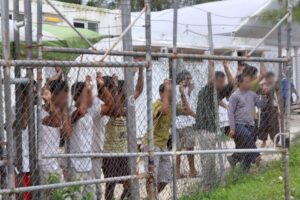 Australia had passed a law about a decade ago which said if anyone tried to break into the country by boat they would be put in offshore detention and not permitted to ask for asylum in Australia, so they ended up with thousands in detention.

Just as Obama was leaving office in late 2016 he promised to take those rejects off their hands, and so here we are now still doing it, although Biden is slow off the dime while Trump admitted 900.

Many Trump left behind are from Muslim countries on the so-called Muslim ban list.  We did, however, admit many Rohingya Muslims Australia was rejecting.

They aren’t “refugees!”  They are illegal aliens.  It would be like us asking Australia to take a bunch of those aliens jumping our US border right now.

From The Sydney Morning Herald:

Almost 1000 refugees still in limbo as US deal approaches completion

The Morrison government is yet to find permanent homes for more than 900 refugees still in limbo after going through Australia’s offshore processing regimes in Papua New Guinea and Nauru, some of whom are entering their ninth year in detention.

The 2016 deal to resettle refugees in the United States, struck at the time by Prime Minister Malcolm Turnbull and US President Barack Obama, has filled three quarters of its 1250-person cap.

There are hopes the US could expand the agreement – which Donald Trump honoured – after President Joe Biden increased the US’s annual refugee intake to 62,500 earlier this month.

To date, 940 refugees have been resettled in the US under the deal, including 34 this year. The Asylum Seeker Resource Centre said another 258 refugees had been provisionally approved for resettlement but were still waiting to travel.

See many, many posts on the Australia dumb deal by clicking here.