Just in time for World Refugee Day today, we have posted a newly updated Fact Sheet on the Refugee Resettlement Program in the US.   The Fact Sheet is posted just below our header, or you can click here and check it out!  Written in collaboration with experts, our Fact Sheet has been visited by over 31,000 readers in recent years.

Readers may also wish to visit our category, where to find information.

And, in almost every case it’s Islamic-generated chaos and violence they are escaping.

Actually the High Commissioner, Antonio Guterres didn’t say that.  He never would say something so politically incorrect.

Do you know who did say something taboo?  Sarah Palin.  In a speech in Washington, DC last weekend, Palin said, referencing the conflict in Syria, these are all Muslims squabbling, so maybe we should just let Allah sort it out.

Here is the obligatory World Refugee Day story from the UN:

GENEVA, Switzerland – War and other crises drove one person from their home every 4.1 seconds in 2012, the UN’s refugee agency said Wednesday, June 19, pushing the number of people forcibly displaced to a two-decade high of 45.2 million.

All told, the UNCHR’s annual figures showed 1.1 million people fled across international borders in 2012, while 6.5 million were displaced within their homelands.

“This means one in each 4.1 seconds. So each time you blink, another person is forced to flee,” Antonio Guterres, the UN high commissioner for refugees, told reporters.

“War is the main reason for this very high number of refugees and people internally displaced. Fifty-five percent of them correspond to the well-known situations of Afghanistan, Somalia, Iraq, Sudan, and Syria,” Guterres said.

Overall, Afghanistan remained the world’s top producer of refugees, a position it has held for 32 years. Worldwide, one refugee in four is Afghan.

Guterres then discussed the latest Muslim vs. Muslim conflict in Syria and reported that they aren’t ready yet to send Syrians to your towns!

“We witness a multiplication of new conflicts, and it seems that old conflicts never die,” he said.

Guterres pointed out that the number of people who had fled the spiraling violence in Syria had soared from 650,000 at the end of 2012 to around 1.6 million now, surpassing last year’s total from all conflicts.

The UNHCR has warned that Syrian refugee numbers could hit 3.5 million by the end of this year, while there are also fears that the number currently displaced within the country, 4.25 million, will also climb.

Guterres urged the international community to help shoulder the load, although he said UNHCR-brokered resettlement programs for Syrians in rich countries were not yet on the cards.

NOT YET, but they sure are sending out feelers as we learned recently, here.  Although that news came as a big surprise to the Senate Republican brain trust of Rubio and Graham, here.

World Refugee Day was started by the United Nations in 2000. It is a PR gimmick to give the media a reason to write about refugees on this day and for the local resettlement contractors to hold special events that would attract media attention.

US State Department employees asked themselves via a photo essay, what this day means to them (besides a pay check).  Visit them here.   The first photo is of Anne Richard, Asst. Secretary of State for Population Refugees and Migration and she believes it means ‘American History.’  I think she might mean how they are changing American history, but I can’t be sure.

Then my favorite photo is this one (below)—I want the map!  It’s a photo of Laurence Bartlett, Director of Admissions who presided over the State Department hearings critics attended, here, in front of a map.

It’s too bad he is blocking some of the states obviously displaying color-coded dots which show refugee resettlement target sites in the US.  If you click on the photo in the original link, it will enlarge enough for you to see some hot spots, but who knows what the color-coding means.  I’m guessing it has something to do with the nationality of refugees or it could be a code for which contractors are located in a particular city. 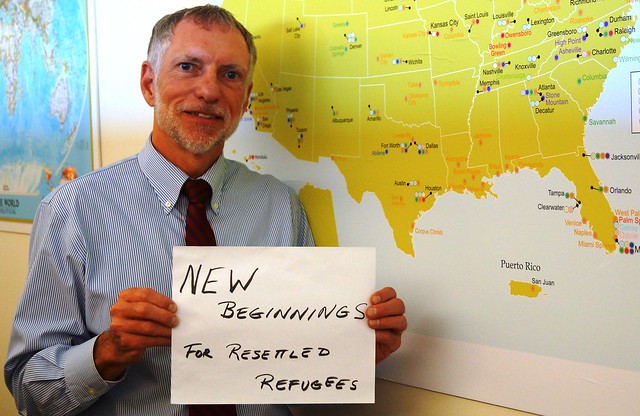