They are all happy, happy, happy that the Biden/Harris (Harris/Biden?) Administration has flip-flopped and flipped itself back to its original goal of moving 62,500 refugees to Anytown, USA by September 30th, the end of the present fiscal year.

And, just to remind you again, these migrants will be chosen by the United Nations and placed in your towns by nine federal contractors*** in addition to the tens/hundreds of thousands flowing in illegally across our borders.

So who is praising Biden this week besides the nine contractors?

First up is Big Meat!

I have dozens and dozens of posts here at RRW from over a decade of writing about how the meatpacking industry (Big Poultry too) has changed the heartland by its greedy desire for a cheap and plentiful supply of immigrant labor.

If you are interested in writing a book, I have done a lot of research for you!

See my tag for ‘Meatpackers.’

The North American Meat Institute today praised President Biden’s decision Monday to increase the number of refugees admitted to the United States – 62,500, up from the Trump administration’s limit of 15,000.

In an email to The Hagstrom Report, the Meat Institute said, “President Biden’s decision to increase the number of refugees is positive news for the meat and poultry industry. Meat packers and processors have employed those in the refugee community because they are hardworking and dependable. Finding a stable workforce is always a challenge….

In 2020, the Los Angeles Times noted that the meatpacking industry is dependent on refugees as employees.

You will see in my ‘Meatpacker’ archive that the refugee contractors (below) work closely with Big Meat to help them acquire a steady supply of workers.

Additionally, Africans are happy because they will see the biggest increase in their numbers in that batch of 62,500.

The Council on American Islamic Relations (CAIR) is happy! 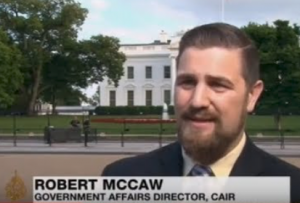 “CAIR welcomes President Biden’s decision to raise the nation’s 2021 refugee cap to 62,500 and his pledge to increase the cap to 125,000 in 2022. Raising the nation’s refugee cap from its historic low was the morally correct decision and a first step to undoing the prior administration’s xenophobic policy of punitively targeting those seeking refuge in our nation as part of an effort to maintain systemic anti-Black racism and white supremacy.

“The American Muslim community is determined to ensure the rights of every immigrant are upheld and our nation remains a place of safe haven for refugees and asylum seekers.”

LOL! And then CAIR can happily use the imported workers to demand Islamic accommodation in the workplace!

The Episcopal Church is cheering Biden!

Here is the press release from the Episcopal Church.  It is one of nine federal contractors that will now be getting a new traunch of federal bucks, your tax dollars, to place refugees throughout the country.

I’m posting their whole gobbledygook press statement here and suggesting they need a new writer in their Government Relations Office:

Today President Biden followed through on his promise to raise the Fiscal Year 2021 refugee cap from 15,000 to 62,500. The Episcopal Church commends President Biden for recognizing the United States’ obligation to protecting some of the most vulnerable individuals in our world. The Episcopal Church has called on the United States and other wealthy nations to “contribute to resettlement, establish and maintain safe and orderly humanitarian protection for refugees, internally displaced persons, and other migrants seeking long-term solutions and safety.” Given that the Episcopal Church has put these words into practice through its refugee resettlement work with Episcopal Migration Ministries and the welcoming work of its parishes, we appreciate the White House has done the same with its campaign promises to expand refugee resettlement and strengthen the refugee program.

“Today’s decision was a very important moment to mark a return to form for the U.S. Refugee Admissions Program and the United States’ commitment to refugees,” said the Rev. Dr. C.K. Robertson, canon to the Presiding Bishop, “for decades we’ve seen Republican and Democratic administrations make robust refugee resettlement an important part of their immigration and foreign policy and appreciate that the Biden administration will follow in their footsteps to serve these populations. The Episcopal Church also commends the work of its members and staff who have been instrumental in advocating for the refugee program and refugees in recent weeks. “The Episcopal Church has a long history of welcoming the stranger and we’re incredibly proud that our members met with and contacted their members of Congress to encourage the Biden Administration to meet its 62,500 pledge,” said Demetrio Alvero.“We stand ready to work with the administration to implement this new goal and its future efforts to expand refugee resettlement in Fiscal Year 2022.”

Alvero is not identified in that release, but here he is as Director of Operations of their Migration department.  That means he is the church’s lobbyist.

The Episcopal Church has obviously determined that we have run out of poor Americans to care for.

Or, is it that there are lucrative government grants and contracts available to them for moving the third world to America and helping supply Big Meat and other global corporations with their worker pawns?

And, Catholics, like these in Arlington, Virginia are happy too because it is so much more satisfyingly to do charitable work for immigrants than for vulnerable Americans.

I could go on and on with woke ‘religious’ charities singing the praises of the Biden decision to put Foreigners First, but this is getting too long already.

Unhappy are American taxpayers who must pay for the importation of cheap migrant labor and new Democrat voters all the while watching their towns and cities changed forever.