Four months into the year (the fiscal year began on October 1, 2019) we have admitted 4,686 refugees from leading sending countries of Afghanistan, Burma, DR Congo, Eritrea, Moldova and Ukraine.  Smaller numbers came from dozens of countries. About 918 of the 4,686 are Muslims.

Here is the big however—Special Immigrant Visa holders from Afghanistan numbered 4,585 in just the last four months bringing the total to 64,280 since 2006. And, those majority Muslim Afghans that supposedly helped us somehow in Afghanistan are given the same privileges as regular refugees. Iraqi SIVs numbered 129 (18,677 since 2006).

Before I get to the details of where they were all placed, don’t miss John Binder’s Friday Breitbart story where he provides the astronomical numbers of migrants coming into the US through myriad legal pathways from the President’s travel restricted countries.

See how many regular refugees were admitted to the US in the last ten years. Note that Obama didn’t set an extremely high ceiling until he was leaving office in 2016 and setting the ceiling for 2017.

Here is a map from the Refugee Processing Center for the first 4 months of this fiscal year.  I showed you how to find this kind of information yourself in Knowledge is Power IV.

You might want to compare this map of where new refugees are being placed right now with the map in my previous post which shows some states that don’t want any, or have not yet made a decision, but are definitely getting some. 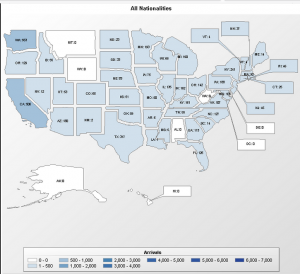 The top five states that are unknowingly getting the Special Immigrant Visa holders from Afghanistan (4,585 nationally in the last 4 months) are California, Texas, Virginia, Washington, and Maryland.

Using my instructions I gave you in Knowledge is Power IV, you can find the towns and cities that host new refugees. For the SIVs you can find only the states by first going here and clicking on “Cumulative arrivals…” (or see below) to find how many went to your state.

Play with the data at the State Department’s Refugee Processing Center, it is fun (sort of) as a cold winter day project!