Governors Kim Reynolds of Iowa and Bill Lee of Tennessee want the Senate to hold hearings on what they see as an outrageous affront to states’ rights as the federal Office of Refugee Resettlement is flying Unaccompanied Alien Children (refugee wannabes) in and out of their states with no communication with the governor or state officials.

We all know that a Senate hearing is nothing but a useless piece of political theater that won’t accomplish smack, but these grandstanding Republican governors obviously think they can trick you into believing they are doing something!

And, what makes me steam over this little temper tantrum by Reynolds and Lee is that they had a chance to take a stand for states’ rights on the issue of the federal government dumping refugees on states and communities back when Trump was attempting to give them more rights (actually give them the rights they are due under our US Constitution) and they snubbed their noses at him.

Trump was trying to give them a chance to say they needed a break from refugees being placed in their states by the feds and unelected non-profit group actors, and they turned him down.

Only Governor Abbott of Texas outright supported Trump’s reform effort and said he would not consent for 2020.

Here is Reynold’s attempting to make you think she is working for Iowans by demanding a Senate hearing—what a joke!—typical oily political move.

From the Ames Tribune:

19 migrant children had a layover in an Iowa airport. Gov. Kim Reynolds wants Congress to get answers

With no notice to the state, at least 19 unaccompanied children were transported in an overnight flight through Des Moines from California in April, Gov. Kim Reynolds confirmed Thursday, saying she wants to know more details.

After deplaning, the children were taken on two buses to be transported to various locations for unification, according to a Thursday news release from Reynolds’ office.

“We weren’t able to get any answers about why there were chartered planes coming in the middle of night — chartered buses — and unaccompanied minors removed from the plane and then transported outside of the state,” Reynolds told reporters Thursday.

In April, a total of 163 unaccompanied migrant children were released to sponsors in Iowa, according to the federal Office of Refugee Resettlement statistics.

Reynolds and  Lee — who says unaccompanied minor children were brought to his state in May without any notification — wrote the joint letter to Grassley in support of the senator’s demands for a Senate Judiciary Hearing into the situation on the U.S. southern border with Mexico.

Gov. Bill Lee is asking the U.S. Senate to investigate the arrival of unaccompanied migrant children in Tennessee, a request that comes as the Republican governor continues to slam the Biden administration over a lack of transparency on the issue.

Their demand for a hearing is easy.

Their demand for “transparency” is their way of making you, voting citizens of Iowa and Tennessee, think that they are doing something, but when given a chance to really take a stand for a state’s right to know who is being placed in their states by the feds, and have an opportunity to say no, they just didn’t have the guts.

Albeit it was a different type of ‘refugee’…they are all refugees now, right!  This letter below is what Reynolds sent to Trump’s Secretary of State.

Notice no interest even in finding out who is coming and how many.

So why would the present administration think they had to confer with these heretofore ‘welcoming’ Republican governors? 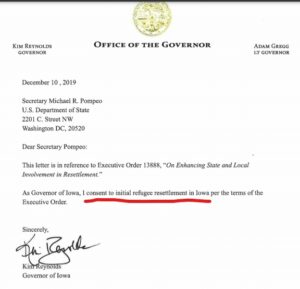 And, here is Lee’s letter that caused an uproar in Tennessee. 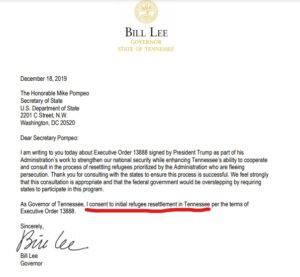 Texas Governor Abbot wrote a detailed letter that ended with him not giving consent to refugees being placed by the feds in Texas for FY2020.

Both Kemp of Georgia and DeSantis of Florida remained silent.

Word is that the Trump people were very shocked and disappointed that most Republican governors turned down the President’s attempt to give them more say, to give them some modicum of states’ rights, in advance of a refugee drop.

If you are wondering whatever happened to that reform effort via a Trump executive order, the refugee resettlement contractors (below) sued and stopped the initiative dead in its tracks.