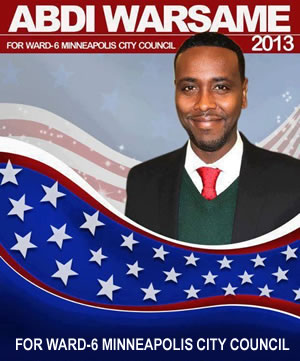 MINNEAPOLIS — The political awakening of Minnesota’s Somali community poses a conundrum for the DFL party. While Somali-Americans overwhelmingly vote Democratic, many appear to disagree with the party when it comes to gay rights.

That tension was on display Sunday, as the party considered a dispute between a Somali city council candidate and the openly gay incumbent he’s running against.

At the meeting, the party’s Constitution, Bylaws and Rules Committee upheld the party’s endorsement of Abdi Warsame, who’s running for a seat on the Minneapolis City Council.

That seat is currently held by Robert Lilligren, who’s been on the council nearly a dozen years. But Lilligren lost the DFL endorsement this year to Warsame after hundreds of Somali-Americans turned out at precinct caucuses in April, and came back to the party’s convention, giving Warsame overwhelming support.  [We told you about the convention here.—-ed]

All 13 City Council wards in Minneapolis were redrawn last year as part of the post-census redistricting, and Lilligren’s ward changed substantially. Somali activists, led by Warsame, lobbied to have the borders moved so that as many East African voters as possible could be concentrated there.