Wow! We had a new record-breaking day this past week (Friday).  Someone picked up an older post of ours and ran with it on social media (who knows why!).
Of course that post is the Number One post listed below.
But, before I get to that, I want to urge all of you to visit my Frequently Asked Questions now linked above in our header (I added this morning’s post on ‘following the money’ there as well).  I think you will find lots of information at the FAQS (faster than trying to get it from me via e-mail).  Sorry, I just can’t keep up with all of your e-mails and phone calls.

Top Three Posts of the week (Top Daily Posts are in the right hand side bar):

Top ten countries from which readers visited RRW this past week (excluding the US):

Please go here to learn more about getting the most out of your visits to RRW (scroll down to New Readers subtitle).
Follow me on twitter because there is so much breaking news on refugees that I can’t possibly post it all! So please follow me on twitter or follow the twitter feeds in my right hand sidebar to keep up with the news!  I am @RefugeeWatcher, click here.  I’m posting articles there that readers send me, but that I simply can’t post for lack of time.

Diversity is beautiful (not!) alert!

Please read this dreadful story yourselves. So much for assimilation!
You can be sure that all of these girls are not traveling back to Africa to have the ‘procedure’ done, it must be being practiced right here in America where it is ILLEGAL.
See City Pages, here for news on female genital mutilation in Minnesota’s African refugee population.
See this map we published back in March: 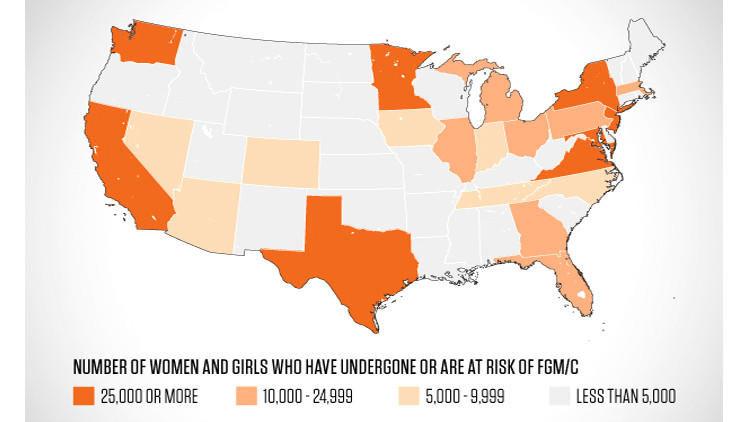 Now, have a look at the map of states with the highest refugee populations.  Although not a perfect match I think we can conclude that if your state gets large numbers of refugees, your chances of FGM happening where you live increases.  So, what are the resettlement agencies doing to help stamp out this brutal treatment of women?  Where are the feminists?
See all of our previous posts on FGM here.

And now, just for fun, see the mosque map for the US (thanks to Allen West’s blog for putting these maps together).

Editor’s note: I think I need to add another thing to my Frequently Asked Questions post which is now readily available just under our header above.

So many of our readers are eager to start researching the resettlement contractors working near you, so here are a few places to start to learn about how they are financed (this is in no way meant to be an all inclusive list, because I don’t know every place to research myself!).
But, first, although off-topic, I want you to see what a one-woman blogger accomplished in Chicago (not a refugee issue, but one involving fraud in the Chicago school system!).  See here (hat tip: Judy).  It can be done!
I’m tech-impaired, but if I can find stuff, so can you.  It just takes a little patience!
Call or write the non-profit group:
Start with contacting the resettlement agency near you (a handy list is here).  As IRS designated 501(c)3 organizations they are NOT allowed to keep their financial documents from you—they are required to give anyone who calls a copy of their financial statement and their Form 990 (if they have one).  Legitimate churches are not required to file Form 990’s so some of the contractors are doing this federal work (resettling refugees) pretending to be churches only.
Go to Guidestar:
Find their IRS Form 990’s on Guidestar by going here and registering to use Guidestar.  It can get tricky because you have to use their exact name as they filed on their Form 990.  For example, you won’t find the Hebrew Immigrant Aid Society, but you will find its Form 990 by typing in HIAS, Inc.
USA Spending.gov:
USA Spending.gov is a very handy site as long as you know the exact name of the entity you are searching for.  It also has the advantage of tracking across federal agencies and will give you grants and contracts!  Enter the name of the non-profit in the search window in upper right.
For example, you might find that a resettlement contractor is getting cashola, not just from the Office of Refugee Resettlement (in HHS), but from the US Justice Department from some voter registration grants.  If you don’t find the non-profit group listed, don’t give up right away, try to find the exact name it is using. I looked up a specific Catholic Charities this morning under its diocese name and nothing came up, but then I saw on their website that they had a slightly different name and found what I was looking for under that name.
Annual reports to Congress:
These are a treasure trove of information on grants and statistics on welfare use (among other things). I see here that they are late again.  FY2014 should have been released months ago.
Office of Refugee Resettlement:
Go here to programs and click on those of your choice to see who is getting all of the (your!) money!
Non-Profit Facts. com:
A reader sent me this website, which I have never used until today, so try it too by clicking here.  I did test it on the specific Catholic non-profit I searched at USA Spending.gov and was disappointed to see that this website did not mention the $140,000 HUD grant they had received in the last year.  However, there are still some useful bits of information here.  For example, I learned that this “church” group was not required to file a Form 990.
And, finally, you will need to check with your state and local governments about funding these ‘non-profit’ groups receive from you at that level.  This post is meant to address only federal money flowing to them.  You may have to use state public information laws to extract information from them.
Other suggestions that have worked for you?  Send them my way!

Here is a short announcement from MagicValley.com:

TWIN FALLS • The III Percent of Idaho is holding a march Sunday to call for an end to the refugee program, which is run locally by the College of Southern Idaho.

Refugee resettlement has been an issue worldwide this year due to the refugee crisis triggered by the civil war in Syria, and there is a movement in Twin Falls to shut down the refugee center here, with opponents citing security and cost concerns.

“The ramifications of ignoring Idaho veterans, homeless, and students will continue to yield tragic consequences if Idaho tax dollars are shifted into a broken refugee system,” the III percenters said in the statement. “Until refugees can be thoroughly filtered, and a more reliable, systematic method of accepting refuges is implemented, we must stand in opposition.”

The article goes on to say that the group supports the bill introduced in Congress by Rep. Brian Babin of Texas that seeks to put the program on hold until the cost to the taxpayers is fully determined.   One of our many posts on the Babin bill is here.

Idahoans should be urging Rep. Raul Labrador to co-sponsor the Babin bill AND urge him to push for hearings on it—he sits on the House Judiciary Committee Subcommittee on Immigration and Border Security.
In fact he is the vice-chairman of the subcommittee responsible for the refugee program!
Although Twin Falls is not in Rep. Labrador’s district, he should be encouraged to take a lead on this issue from his all important committee leadership position.  He needs to tell Trey Gowdy (the chairman!) to hold hearings on the Babin bill.
Learn more about the III of Idaho, here.
We have an extensive archive on Twin Falls, Idaho.  Go here to learn more.
Labrador’s district has dodged a bullet (so far) as we learned here.
And, one more bit of news:  we’ve learned that a new ‘Pocket of Resistance’ is forming in Boise!