If you wonder why more local elected officials aren’t brave. See what the Leftists do to those who go against them—mayors like Springfield, Mass  Mayor Sarno!

The Open Borders Leftwingers are ruthless and this is the type of in-your-face agitation they have no fear of launching, but LOL! I think this one backfired.

The Interfaith Council of Springfield Mass placed a full-page ad in the Sunday edition of a local paper to shame the mayor—they don’t want Springfield to be the first city in America to say NO! to more refugees.

(If you are confused, according to the US State Department’s Funding Guidance it is county governments that must officially opt-in or opt-out of refugee resettlement under the President’s plan, but the Open Borders activists are going after cities probably because they think that mayors are an easier target.  For the record, the first county to say NO is Appomattox County, Virginia.)

Here is the news, and then I’ll get to why the resettlement contractors’ (in this case primarily HIAS***) aggressive action, via the local Interfaith group, is backfiring!  (I’ve warned you before about ‘Interfaith groups’  as primary promoters of refugee resettlement.)

SPRINGFIELD – A full page taken by the Interfaith Council of Greater Springfield in the Sunday Republican today is requesting that Mayor Domenic J. Sarno bring unity rather than refusal around the issue of refugee resettlement in the city, saying in what it calls an open letter “no human is a burden.”

“Springfield is now the first city in the country whose mayor has refused to issue a letter of consent to allow refugee resettlement to continue,” reads the council’s letter.

“This is not a distinction we bear lightly.”

The statement, whose dozen signatures include those of the Western Massachusetts Conference of the Evangelical Church of America, Sinai Temple and the Islamic Society of Western Massachusetts, adds, “Instead of assigning blame to a small and already marginalized group, what if we were to bring people together – across our divides – to create real solutions? If, as the Mayor suggests, neighboring communities need to do more, one wonders what can be done to bring people together around such a solution. Many or us are ready to step forward.”

Following a unanimous City Council vote Dec. 16 supporting local involvement in refugee resettlement, Sarno issued a statement of opposition and in a Dec. 18 letter to MassLive and The Republican outlined why he would not issue a letter of consent permitting refugees to be resettled in the city.

In his letter explaining his refusal to do so, Sarno said, “It’s time for other much more affluent communities to take on their fair share.”

“My position has been very clear on that this issue taxes our city and school services and calls into question the accountability and follow-through aspects of refugee agencies, who not too long ago, placed a number of refugees in condemned housing units,” Sarno wrote.

“We have a number of residents in Springfield who need assistance and that will continue to be the concentration of my efforts. Springfield has proudly done more than its fair share on this issue.”

In an Dec. 18 interview about its work with refugee resettlement, Maxine Stein, president and chief executive officer of Jewish Family Service of Western Massachusetts, the largest area agency doing such work, said, “Refugees are not taking services from our city.”

JFS is the oldest and largest refugee resettlement agency in Western Massachusetts and works in partnership with the Hebrew Immigration Aid Society or HIAS and the State Department in what, prior to the Trump administration, had been resettling some 240 refugees annually in the area.

HIAS is among the organizations that have filed suit against the administration over Executive Order 13888. [We expect that case to be heard in a Maryland court in early January—ed]

There is much more, please read it all.

So why do I say their aggressive ad backfired?

As of this writing there are 98 of them, and based on a quick look the vast majority are in support of Sarno.

And, this is the ‘peoples’ republic of Massachusetts.’

Here are some screenshots of just a few recent ones (there are many more, but I had to quit for the sake of time!)  Go read them yourself and maybe consider adding a few more. 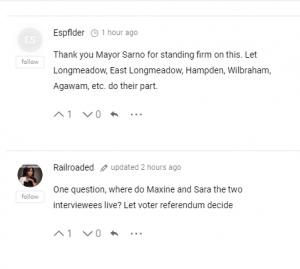 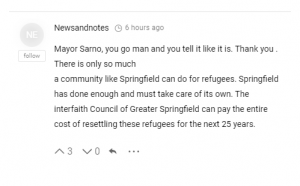 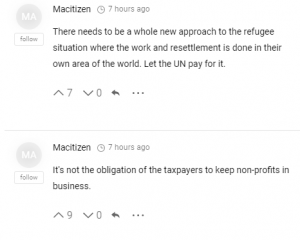 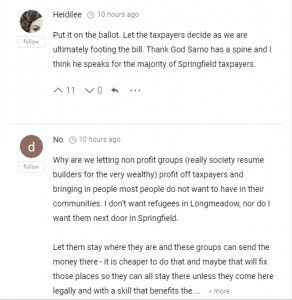 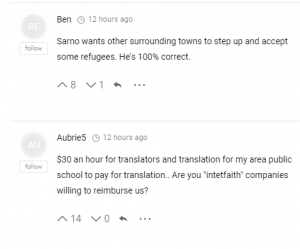 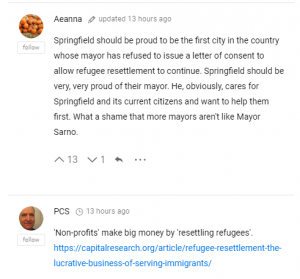 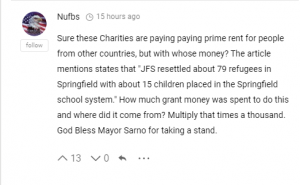 ***Don’t miss yesterday’s post where I explained that this exercise is all about MONEY for the contractors.

It is kind of funny, in the Bible Belt, the contractors are using Leftwing Evangelicals to carry their water.  In Minnesota it is Leftist Catholics and Lutherans, but in the more liberal north east they turn to extremely Leftwing Interfaith groups symbolizing multicultural mush—love and peace for one and all.